Matthew Christensen is the Chairman of the Board of Directors of Astoria Solutions Pte Ltd. Graduated from the Harvard Business School, he is the CEO and Co-Founder of Rose Park Advisors, a hedge fund investment management company based in Boston. Rose Park Advisors focuses on making investments in companies whose strategies are based on harnessing the benefits of disruptive innovation, a theory developed by Matthew’s father, Harvard Professor Clayton Christensen, who co-founded Rose Park. 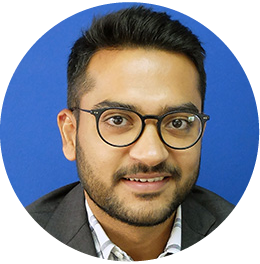 Rakesh Chennuru is currently in the second-generation leadership team of Aparna Construction, a major real estate development corporation in Hyderabad, India. Educated in Singapore and conferred the Master of Science by Nanyang Technological University’s Technology and Innovation Programme, Rakesh combines the latest in management thought with age-old Indian customs and business practices to blaze a trail in strategically positioning Aparna for the 21st Century. As the scion of a well-established business family in India.

Dominic is a recipient of the Ministry of Transportation's Minister’s Innovation Award 2010 and was nominated for Microsoft’s Innovation Award in 2008. Dominic also represented Singapore and the Asia Pacific Region (ex-Japan) to Microsoft’s Global Manufacturing Roundtable at the World Partner Conference in Los Angeles in 2011. Dominic has a Bachelor of Engineering (EEE) and Master of Science (TIP) both from Nanyang Technological University, Singapore. Dominic received the Honor Roll Award for his Master’s, which was partially sponsored under Singapore’s prestigious Economic Development Board scholarship. In the past Dominic had served on the Board of Rotary Club of Bukit Timah in Singapore, and conferred the Outstanding Young Rotarian Award for work done with infirmed residents of elderly homes. Dominic loves all things gastronomical.